Victoria Smurfit (Marcella, Once Upon a Time) joins the cast for the second series in the role of Olivia Foyle, an enigmatic widow at the centre of Brannick’s latest case.

When the murder of a crooked accountant unravels a trail of greed that threatens to expose his identity as legendary assassin, Goliath, DCI Tom Brannick (James Nesbitt) and the accountant’s widow, Olivia Foyle (Victoria Smurfit) must keep each other dangerously close.

As they try to solve the riddle her husband left behind, and become more and more immersed in the puzzle of each other, Tom and Olivia draw in Tom’s fellow officers DS Niamh McGovern (Charlene McKenna), DCS Jackie Twomey (Lorcan Cranitch) and DC "Birdy" Bird (Chris Walley), as well as Tom’s daughter, Izzy (Lola Petticrew) until deceit and betrayal force Tom to question just what lengths he will go to, to keep his legacy intact. 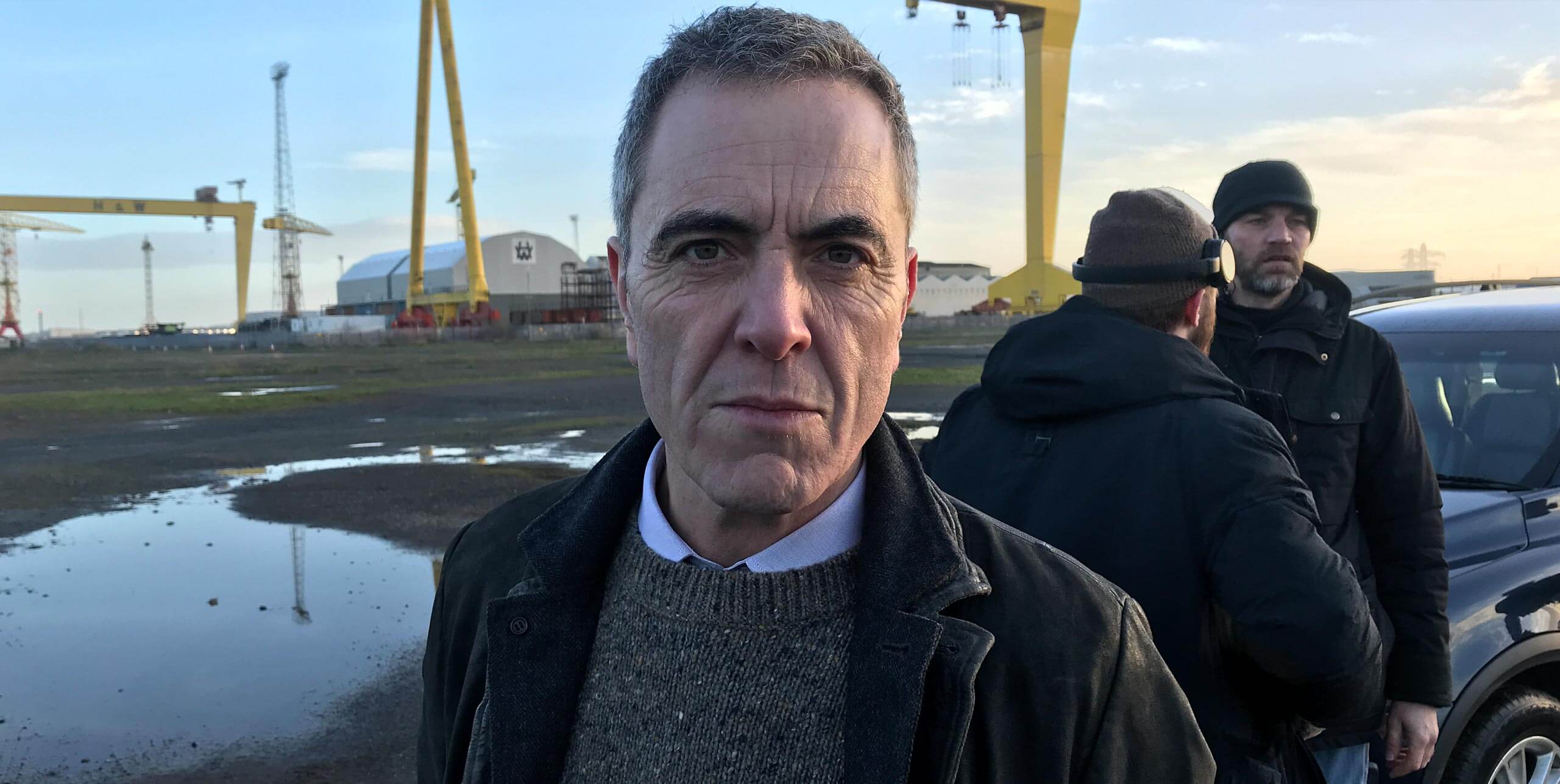 HTM Television is thrilled to soon present audiences with its first original drama, Bloodlands - a high-stakes four-parter for BBC One starring James Nesbitt.

Written by newcomer Chris Brandon - with Jed Mercurio and Mark Redhead as Executive Producers – Bloodlands is the gripping tale of Northern Ireland detective Tom Brannick (Nesbitt). When a car containing a possible suicide note is pulled out of Strangford Lough, Brannick quickly connects it to an infamous cold case with enormous personal significance; an assassin nicknamed Goliath. A killer whose victims lay on both sides of the political divide.

James Nesbitt describes Bloodlands as “a cat-and-mouse thriller, but the fact that it has the legacy of the Troubles brings an added interest to it. It’s also a story about a father and daughter, and loss - really human stories attached to it,” he said.

“But also, it’s a classic Jed Mercurio thriller, where you’re not really sure what’s going on, so it’ll keep viewers on the edge of their seats.”

For writer Chris Brandon, who spent part of his life growing up in Strangford, the idea came from a distinct sense of place.

“I was visiting family there in 2013 and I was looking around at the amazing landscape – the windswept islands, the bouldered shorelines – and it just sparked my imagination. It struck me that this was a place where secrets could be buried.”

Brandon grew up in the era of the Troubles, a 30-year period of political bloodshed in Northern Ireland.

“It’s now 23 years since the Good Friday Agreement ended most of the violence, and although the Northern Ireland we know now is mostly at peace, the foundations of peace are delicate,” he said.

“The legacy of violence has left indelible scars. How Northern Ireland moves forward, depends very much on how it deals with its past. Many feel there may be peace but there is still injustice. Many question how there can be reconciliation without truth.”

So Brandon wrote a story with that question at its heart, and was delighted when it fell into the hands of television writer and producer Jed Mercurio.

“He’s been an amazing mentor to me, he has such a fantastic can-do attitude,” he said.

“Jed knows Northern Ireland really well given he films Line of Duty there; he knows the crews, the local talent and obviously I’ve been an avid fan of his work for years, so this whole process has been a huge privilege.”

Mercurio said Brandon’s story resonated with him, because it explored a difficult, important dilemma.

“It’s more than a gripping police thriller,” he said.

“Bloodlands explores the dilemma of whether seeking justice for Goliath's long-dead victims should jeopardise the fragile and hard-won peace of present-day Northern Ireland.” 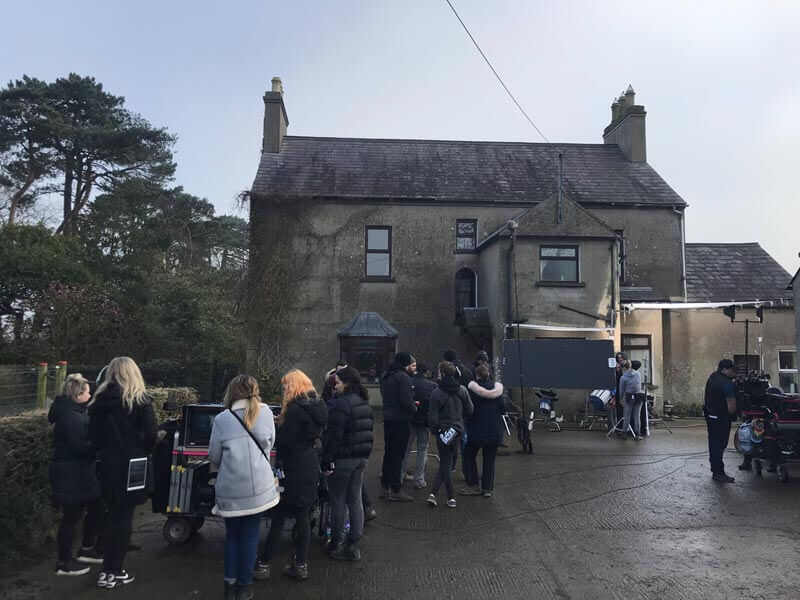 Mercurio was Executive Producer on Bloodlands along with Mark Redhead, whose own experience of working in Northern Ireland, on projects such as Bloody Sunday, has given him an in-depth knowledge of the Troubles.

Of course, none of the team knew when they started the shoot in January 2020 that just two months later, a global pandemic would force the shutdown of productions. Fortunately, Bloodlands managed to finish its shoot just three days before the first UK lockdown was imposed, but it meant radical changes to the post-production experience.

Director Pete Travis (Cold Feet, Omagh) said whilst deeply challenging, the switch to an online-only environment for post-production was rewarding.

“We were breaking new ground; usually on a big four-hour production for the BBC you as the director are sitting next to the editor in the suite, you’d also be at the composer’s house for a while – it’s a personal and intimate experience, much like filming is,” he said.

“But that was no longer possible, and whilst initially we found the prospect of doing post-production without physically seeing any of our colleagues strange, it was also invigorating because it was still a hugely collaborative process and it felt good to know that despite this terrible crisis, we could still get on and do the job, and do it well.”

Pete Travis said as soon as he read Brandon’s pilot script, it was a no-brainer for him – he was in.

“It’s always about the script with me. Chris’ story jumped off the page. I’d previously made a film about the Omagh bombing which explored this notion that the quest for justice was, in some cases, being prejudiced by the quest for peace,” Travis said.

“Bloodlands explores that same question - what happens when justice and peace are at loggerheads?”

For Travis, the psychologically fascinating character of Tom Brannick and the casting of Northern Ireland’s favourite son James Nesbitt was a winning combination.

“To have someone like Jimmy – the man everyone loves, with a twinkle in his eye, playing this person with a dark past was exciting to me,” the director said.

“Plus, I’d worked with Chris Hall (Series Producer) before, and I’m a big fan of the work of Mercurio, Redhead and (Hat Trick Managing Director) Jimmy Mulville, so I jumped at the chance. When projects like this come along, you basically stand there with a baseball bat trying to make sure no one else gets the job because opportunities as good as this are rare.” 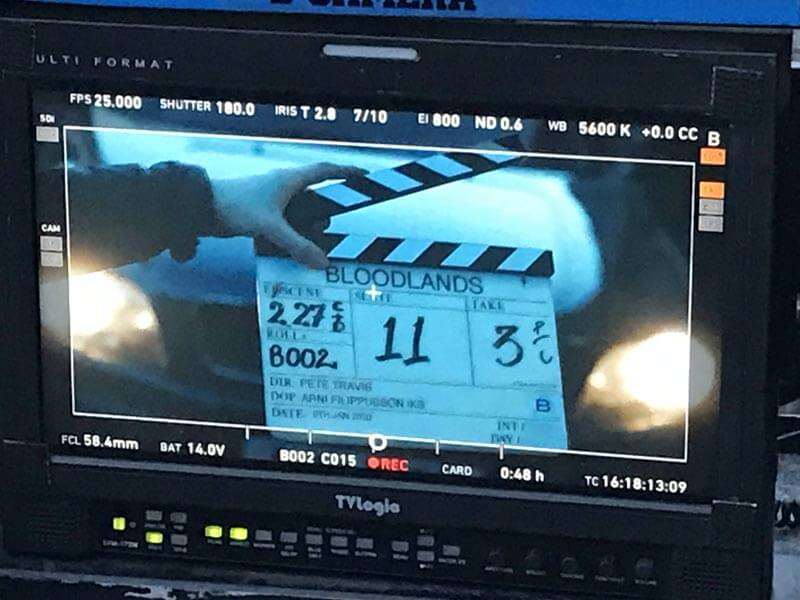 Aside from promising viewers a riveting ride, Bloodlands showcases the stunning beauty of Northern Ireland, although Nesbitt admitted capturing that beauty made for tough filming conditions.

“It’s beautiful, but it was absolutely freezing! We were filming around Strangford Lough and when the wind comes up there it’s just so bitter – there were times we couldn’t speak because our jaws were locked.”

“I remember one day filming in a snow blizzard, having to make our way to set by jeep as the cars couldn’t make it up the mountain,” she said.

“Once I sat back into the car after a take and Lola Petticrew burst into a fit of giggles as I looked like an extra from a disaster movie “Alive”, there were little mounds of snow caked over my lashes and my lips were blue!”

Dwan praised writer Chris Brandon as an ‘extraordinary talent’, adding she was completely drawn in from the first read.

“The thing about a well-crafted crime drama is that it provides the audience a purchase in the story to wonder and piece together what is happening, so one feels personally invested,” she said.

“From the moment I opened the script I was no longer just interested in my own character’s plot but totally gripped by the whole story. I feel immensely proud to be part of this.”

“She is at times hard to read, and she reveals very little about her personal life. Her cogs are always turning and she is like a bloodhound, very instinctive,” McKenna said.

She is very bright, and the fact that she is already a DS and a woman at such a relatively young age is an incredible feat. The statistics of female Catholic officers are still quite low in the PSNI. So, she is exceptional.”

Lorcan Cranitch – who plays Tom Brannick’s boss DCS Jackie Twomey said the role appealed to him on many levels.

“Like Tom, Jackie has been in the police force all his professional life. When he joined, it was known as the Royal Ulster Constabulary. As a young recruit from the Catholic, nationalist community, it was a brave step,” Cranitch explained.

“But Jackie believed and still does, that the way of peace is best served by seeing things from another side.”

Bloodlands will hit screens on BBC One soon. 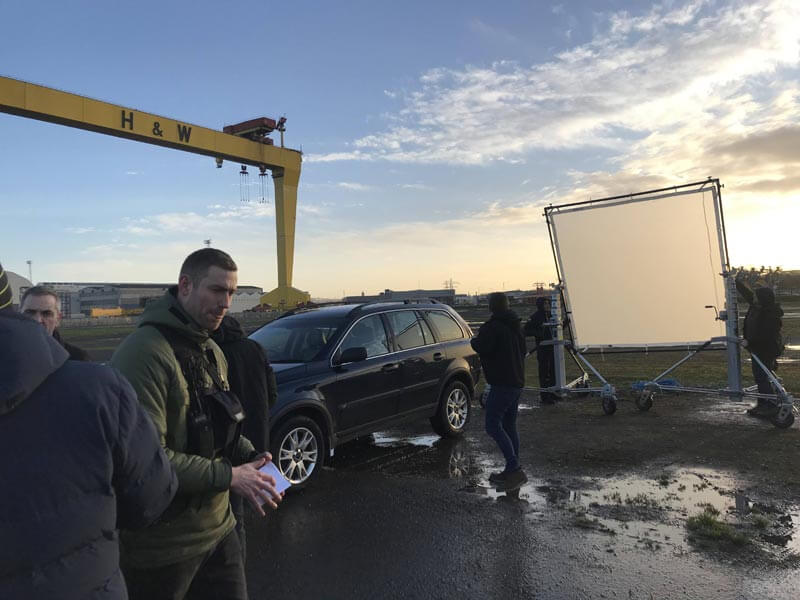